Black Spout Woods is home to many creatures, both mundane and magical. However, this beautiful rugged landscape in Scotland holds something far more important. It is said to be the location where Faeyna, Faerie Queen of Waterfalls holds court. Somewhere near the famous "Black Spout Waterfall" is said to be her "Palace of Mirror Pools", a very important place for magical creatures around the globe. The Mud Trolls of Black Spout even recognize it as a pilgrimage site, where many bring tribute and their gratitude.

You have to understand the nature of waterfalls first. Every waterfall, creek and river leading to it and every single pool at the end of each waterfall is linked. Sounds bizarre, right? But really, a goblin in France could drop his favorite cuddle stick into a waterfall (by accident of course, one does not simply loose his cuddle stick). And it could wash up somewhere in Canada or Australia. How? No clue, but it must has something to do with the magical and spiritual nature of both waterfall and water itself.

Coming back to Faeyna; she is said to receive items and stories (because tales and songs also travel faster over water) from all over the world within her Waterfall palace. My thought was to create a little nice tribute that resembles this collective of different ingredients that might end up in a waterfall somewhere, but also create a dish that captures the flowing water aspect.

What do we need?

We will make a Bulgur salad with a Tahini/ Yogurt sauce, accompanied by Garlic/spicy Shrimps. If you want to leave out the shrimps, we will give an alternative at the end of the recipe.

For the Bulgur Salad:

Now its time to plate your dish. As you can see on the pictures I added some edible flowers for the color. You can also use some vegetables to create color on the plate. Since this is a cold dish, you can take your time. I would advise pouring the sauce as the last thing you do, as it can quickly spread out and cover the whole plate if it is a bit thin.

I hope you liked this recipe and agree with me that this is a proper tribute dish to Faeyna, Faerie Queen of Waterfalls. If you have any questions or thoughts you want to share; do not hesitate to use the comment option below or send me a mail. Enjoy cooking! 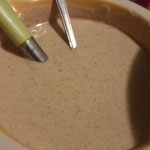 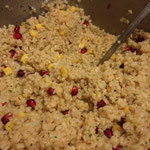 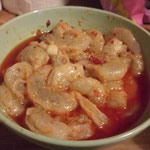 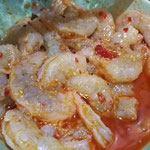 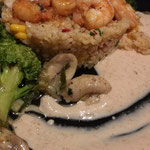 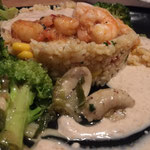